With LED technology gaining a gradually bigger slice of the lighting market the need arises for LED lighting specialists and producers to explain relative complicated technical terms to the general public. While doing so, there should be a focus on the easy and fast.

LED color consistency is one of the important terms that requires an easy explanation.  Everyone can notice when there is a lack of color consistency, especially in the case of white light.  The image below shows this clearly, the white LED light has different shades. 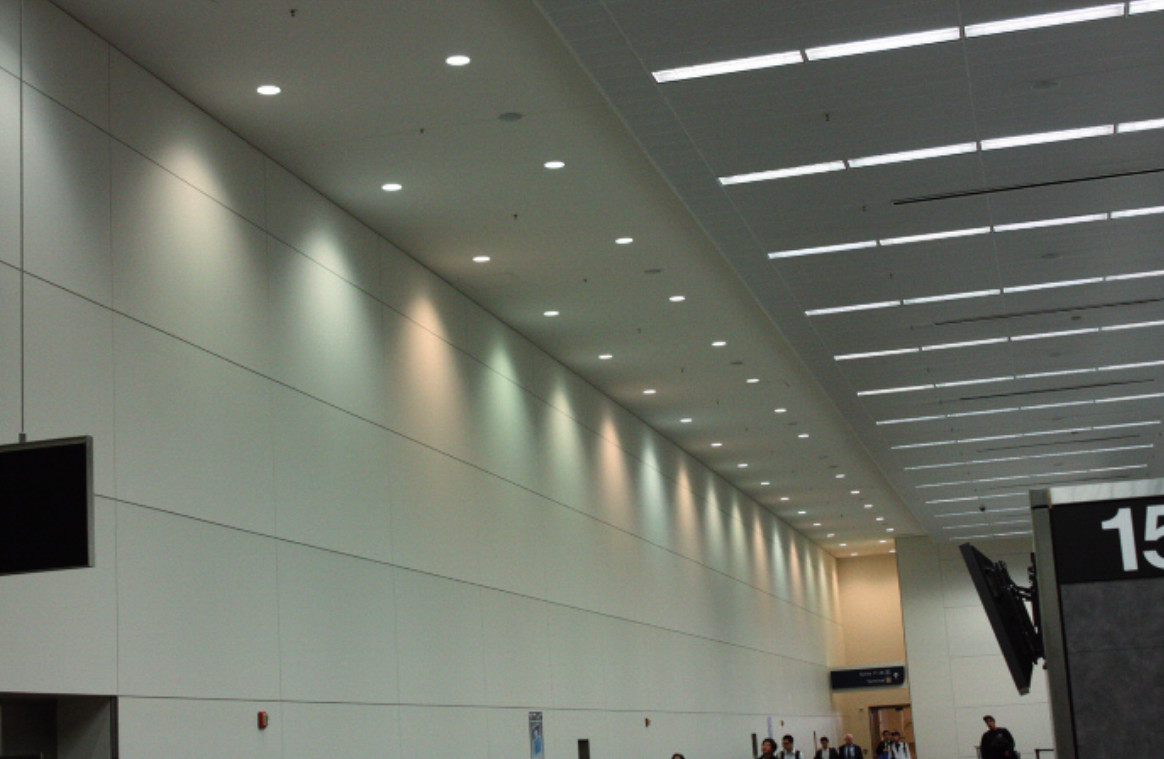 This is the most extreme of cases, with LEDs or luminaries having all the shades of white mixed up: warm white, pure white and cold white in one installation. However the same phenomenon exists for products marketed as warm white, pure (natural) white or cold white.

For our easy explanation we will focus on warm white LEDs although it can apply to pure and cold white also.

Warm white LEDs, as with all manufactured products, have material and process variations that yield products with corresponding variation in the shade of white light emitted.  For example Nichia warm white LEDs just out of the production line can have a color temperature between 2580K and 4260K.  If they would be directly integrated into strips or luminaries they will yield color inconsistent products that are generally unusable.

To overcome this problem, LEDs must be color sorted by the manufacturer with additional further sorting down the supply chain, if necessary.

Color sorted LEDs are grouped in batches known as "Chromaticity Bins". Nichia, as a LED manufacturer, groups warm white LEDs in four Bins which is perfect for our easy explanation.

LEDs Chromaticity Bins explained with a deck of cards

We can associate each Bin to the symbol from a deck of cards: 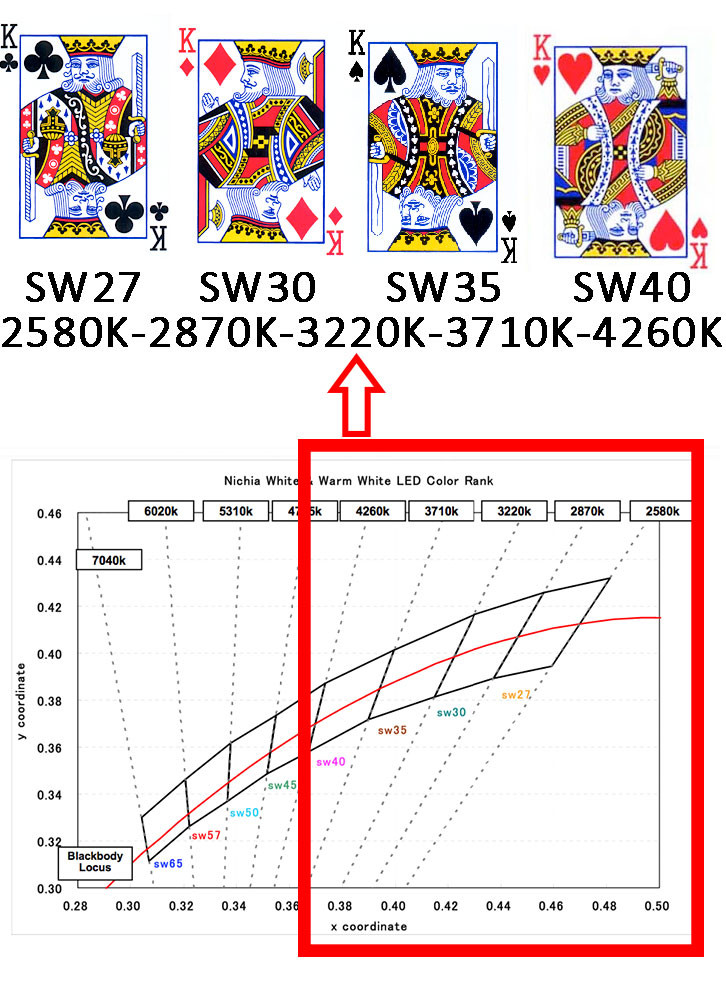 This is the most basic sorting and, as with a deck of cards, there are more important details to follow.  Each symbol from the deck has a number of cards, and if the symbol is the BIN then the cards represent the sub-bins. For Nichia the number of sub-bins (cards) can be up to 16. 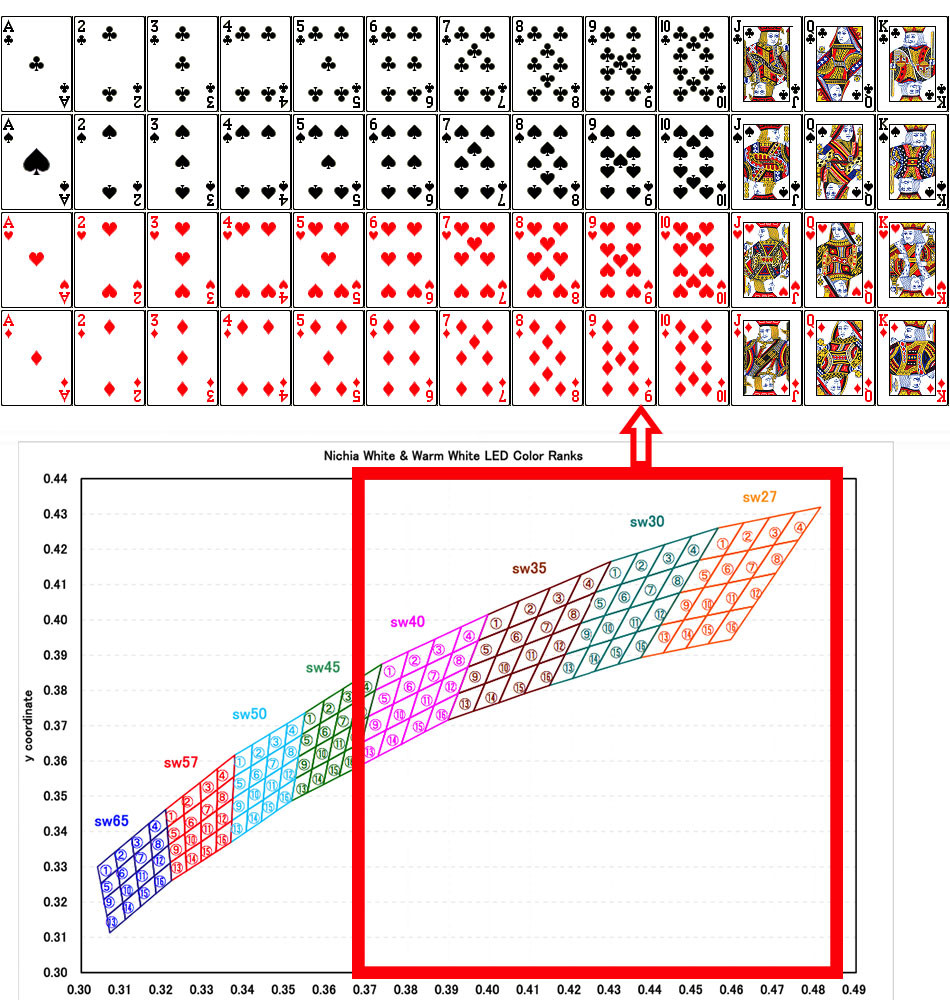 While the notion of sorting seems something straight forward, the process of ordering LEDs from the manufacturer is not. Common sense would say that if a a deck of cards symbolizes our choice of LED Bins and Sub-Bins, we then can pick any card we like for our order. That is not true, we can never pick one card from the Bin Deck. Further more, we cannot even pick two cards. The minimum we can do is choose the symbol (Diamonds for example) and ask to receive three cards with this symbol from the deck.

1. Choose the card symbol only (Bin Only)

The most basic, used of choices and with the lower cost.  For example we choose the Clubs cards (SW 2580K-2870K).  Our delivery will consist of a totally random number and set of Clubs cards. Before taking this choice we must be sure our project will not suffer, as the differences in the color temperature will be visible.

This choice is usually good for street lighting or Christmas lighting.

The second most basic of choices with a similar low cost. If we choose the Clubs cards (SW 2580K-2870K) our delivery will consist of a random number and set of cards that fall within a sub set of 7 cards from the deck.

3. Choose the card symbol and ask for 5 cards in order (Bin with 5 step MacAdam Ellipse Sorting)

With the advance of LED technology Nichia has introduced the Binning system based on MacAdam Ellipses which can also be explained with cards.

If we choose the Clubs cards (SM273 2580K-2870K) our delivery will consist of a random number and set of cards that fall within a sub set of 5 cards from the deck. 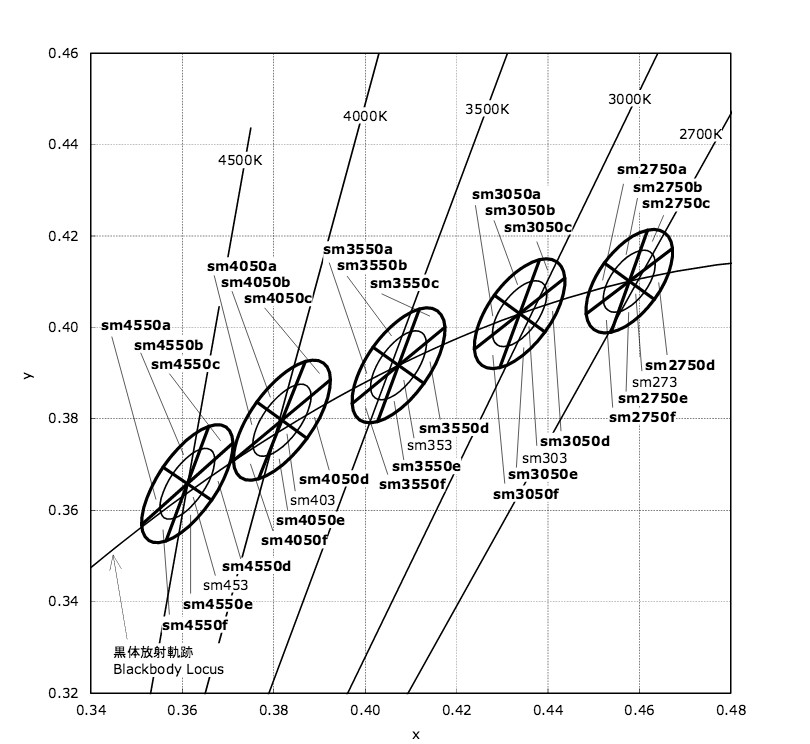 For many projects this sorting is satisfactory. Usually a 5-10% price increase results from 5 step MacAdam Ellipse Sorting.

4. Choose the card symbol and ask for 3 cards in order (Bin with 3 step MacAdam Ellipse Sorting)

Currently this is where the limit of LED manufacturing takes us. To continue our example, from the Clubs cards (SM273 2580K-2870K) our delivery will consist of a random number and set of cards that fall within a sub set of 3 cards from the deck. With this choice the differences in the color temperature will almost be invisible.

3 step MacAdam Ellipse sorting is usually not offered as standard and has 20-30% higher price. This choice could be further be upgraded with asking for the cards in the middle of the deck. 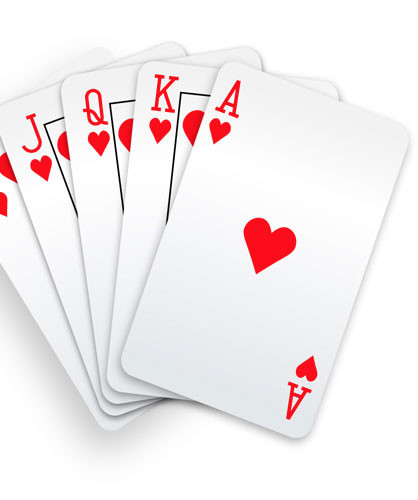 A color difference of 1 MacAdam Ellipse “step” is not visible; 2 to 4 steps is barely visible; and 5 or more steps is readily noticeable.

Based on the project the acceptable color difference should be chosen with 3 "step" being the best possible as of today.