A cove luminaire is a line of light made via an LED strip that is hidden from view, within a cove in the wall or ceiling. The cove then illuminates an adjacent surface from where the light is reflected into the room to be illuminated. For this reason, lines of light are generally referred to as cove or indirect lighting.

Cove lighting is a popular trend in lighting design, focusing on human nature and the behavior of natural light. It is widely used found today as the preferred choice of lighting interiors.

The attraction is the similarity with the natural light. With the right light source, we could imagine that the cove is actually a hidden window to the outside from which the sunlight streams in. 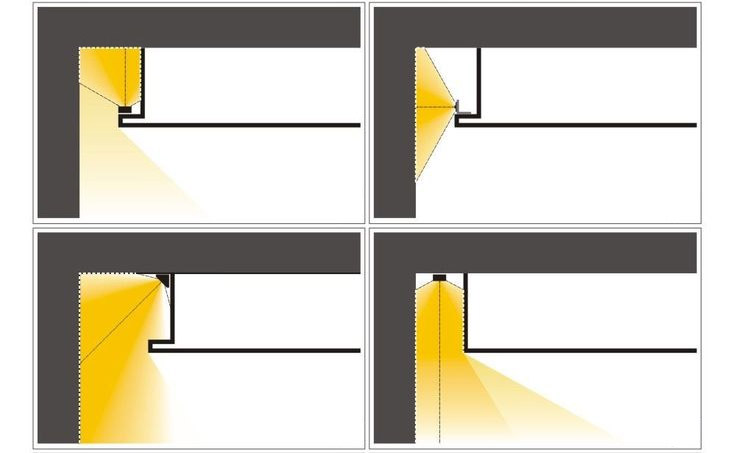 Let's see how we can achieve the best results with cove lighting.

1. Use of energy-efficient light sources

Choose LED modules or strips with high energy efficiency, at least 100 lm/w. Place them within the cove light, so that most of the emitted light reaches the reflective surface, such as a wall or ceiling, that directs it into the interior. Waste of energy for lighting the interior of the cove should be avoided. LED strips with 120-180° are recommended, which should be placed at an angle if possible:

Surfaces that are more absorptive than reflective, like dark paint or wood, should be avoided unless the design is primordial to energy efficiency. White ceilings produce the best results. 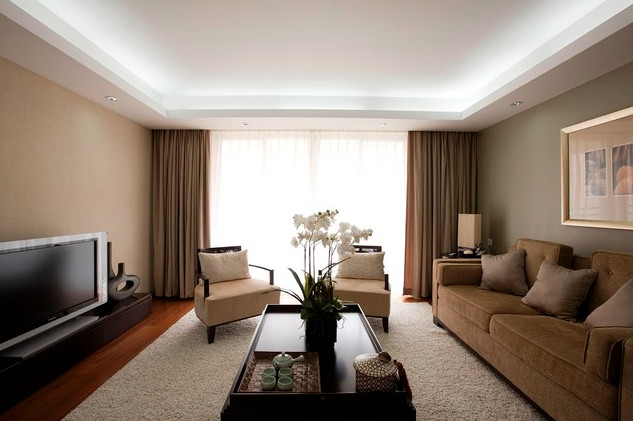 2. Select an LED light source with the correct light output.

The illumination of coves can serve a variety of purposes. It can guide people, highlight architectural elements or trigger a particular design trend, while also providing ambient, general or workplace lighting.

It is strongly recommended that the purpose of the lighting determine the type of light source to be used. The following luminous flux per meter for a LED strip can serve as a useful orientation aid:

Ambient light or highlight of objects, furniture elements: up to 500 lumens per meter (160lm per foot) 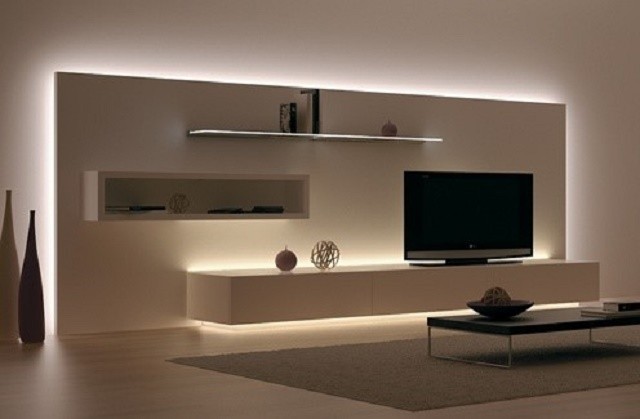 Highlight architectural elements: up to 1000 lumens per meter or 300 lm/foot (many other light sources exist in the space) 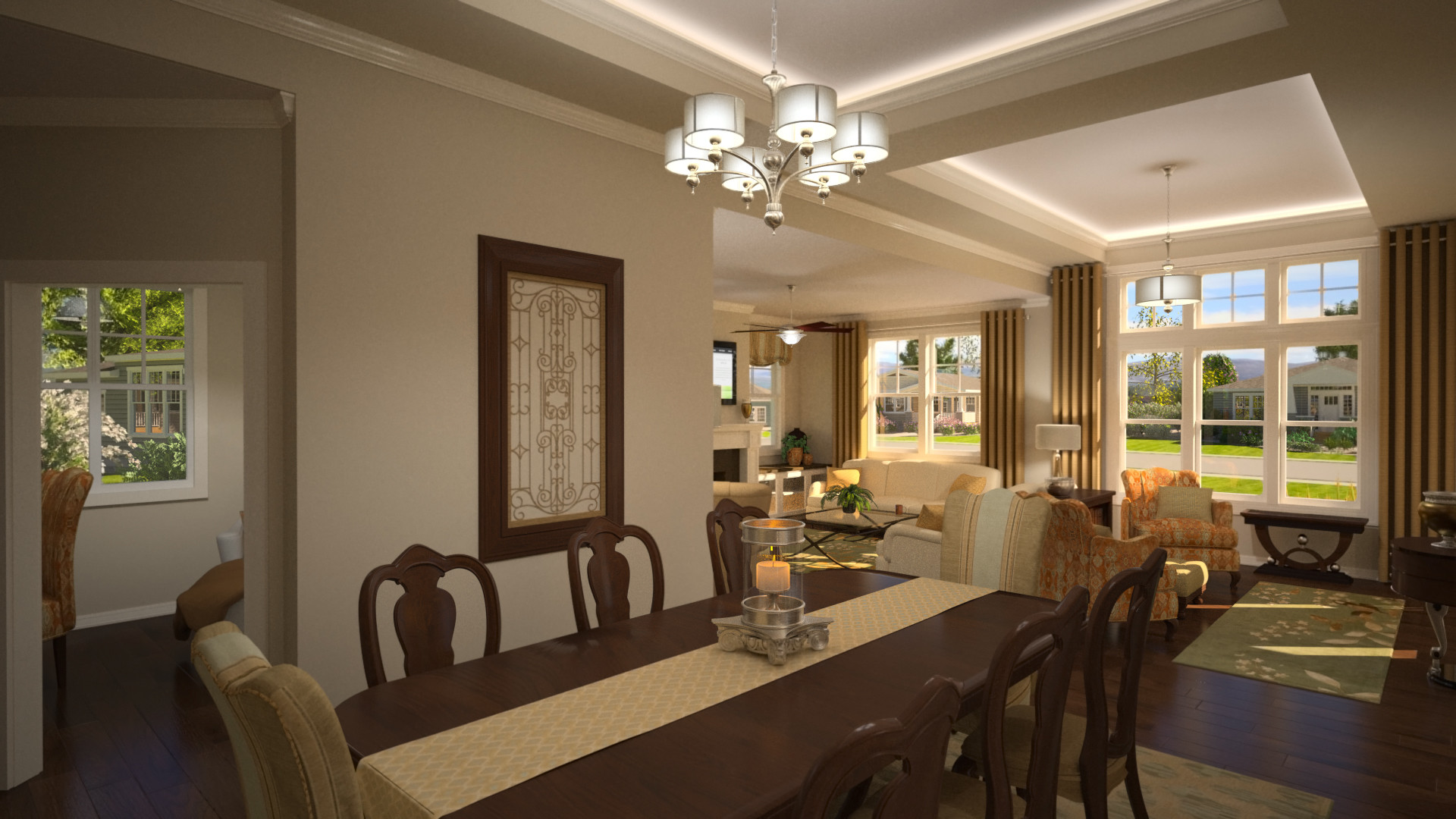 General lighting via lines of light: up to 2500 lumens per meter (600 lm/foot), depending on the design of the cove and the materials used. 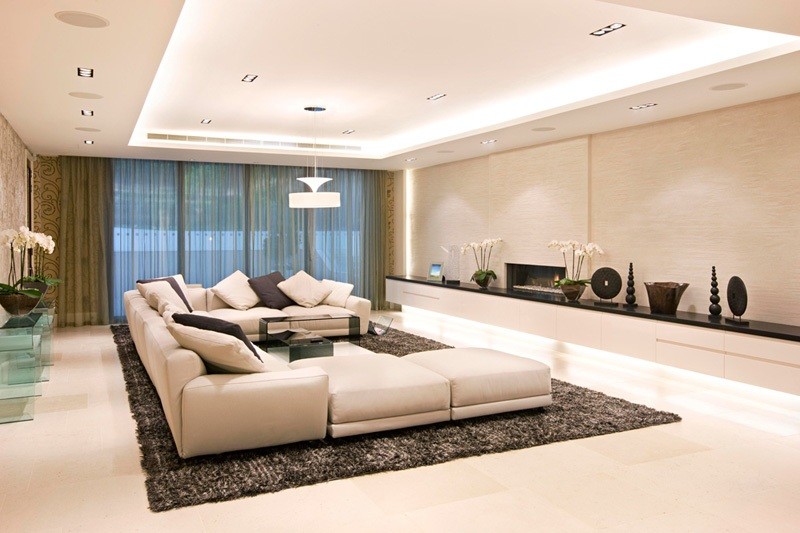 Suggestion for length of cove of light for a living room of 20 sqm with 2.5 m in height with the purpose of general lighting:

3. Use LED strips that are easy to install and have low redundancy of parts

The light sources have to be easily installed out over long distances and use as less auxiliary items as possible, for example wires, connectors, screws or transformers.  A large capacity transformer is recommended.

4. Use LED modules or strips with the best light quality, spectrum and color rendering index.

If a cove light is to be an imitation of daylight, then it should be such in almost all aspects, including the spectrum and color temperature. 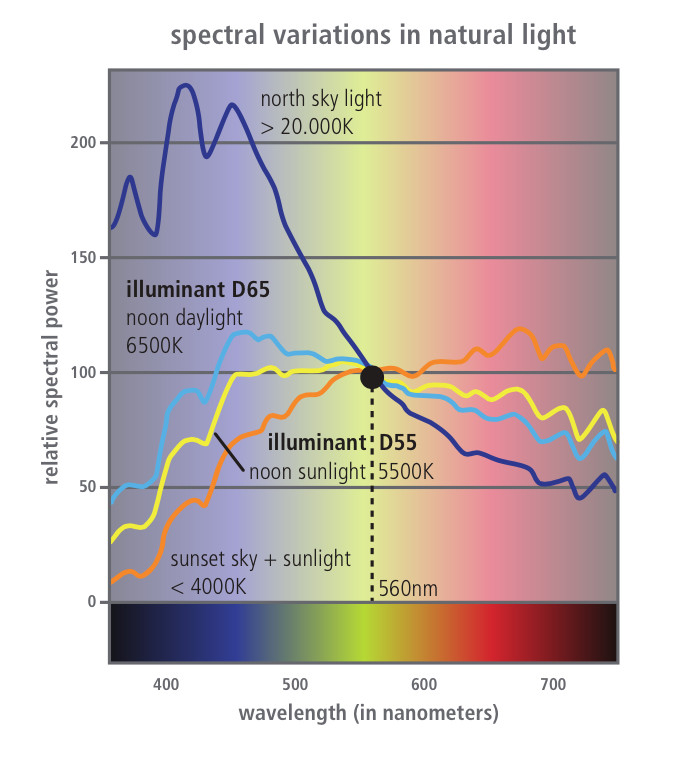 Currently the closest match to the sunlight come from LEDs come with full spectrum technology, such as Nichia Optisolis (CRI98+) and Seoul Semiconductor SunLike (CRI97+), both with almost day-like spectrum and maximum scores for all the CRI test colors. Their spectrum and how it compares to sunlight and other light sources can be seen below. 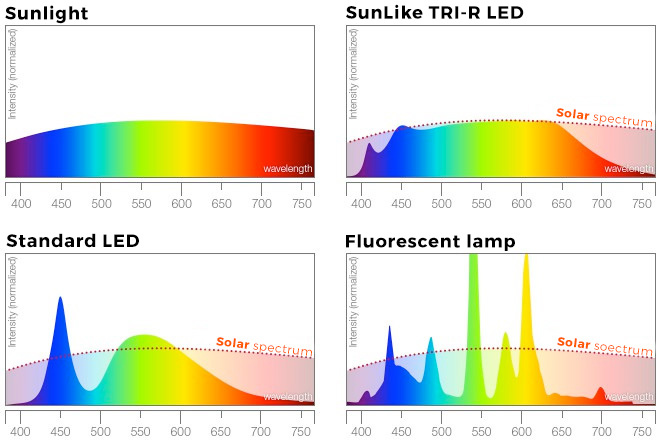 Choose LED strips with minimum CRI80 for all work and living places, such as office, living room, dining room bedroom and so on with CRI95+ as the recommended value. 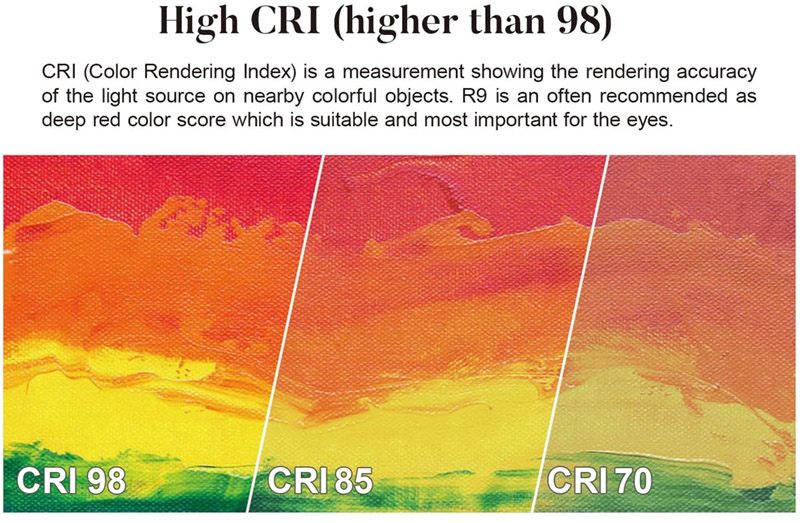 Long-lasting LED light sources with minimal color shift in time are recommended, especially for installations with considerable length. If the brightness of the light source fades too soon or the color temperature changes, the total replacement of the installation could be the only solution for uniform lighting.

For example, if "LEDs 1" are used in the installation and the light changes as in the image on the right, replacing only some sections with "LEDs 2" will exacerbate the lack of uniformity, as in the image below. 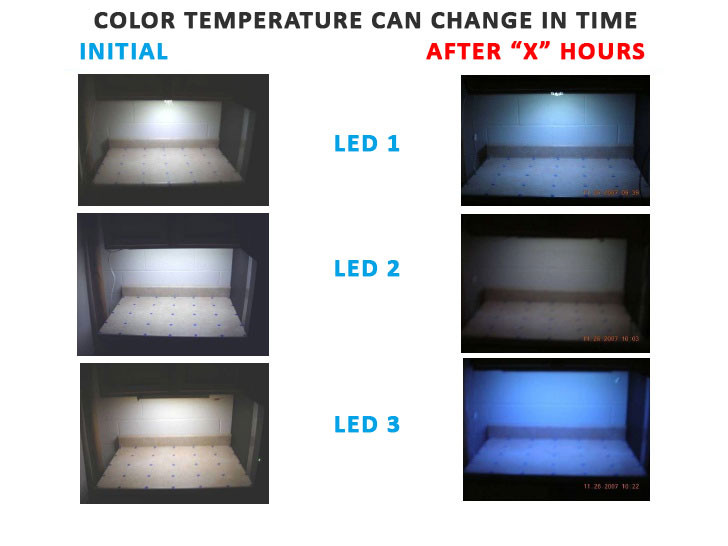 A "rainbow" of shades of white is generally not desirable. Replacing parts of an installation can lead to such an outcome. 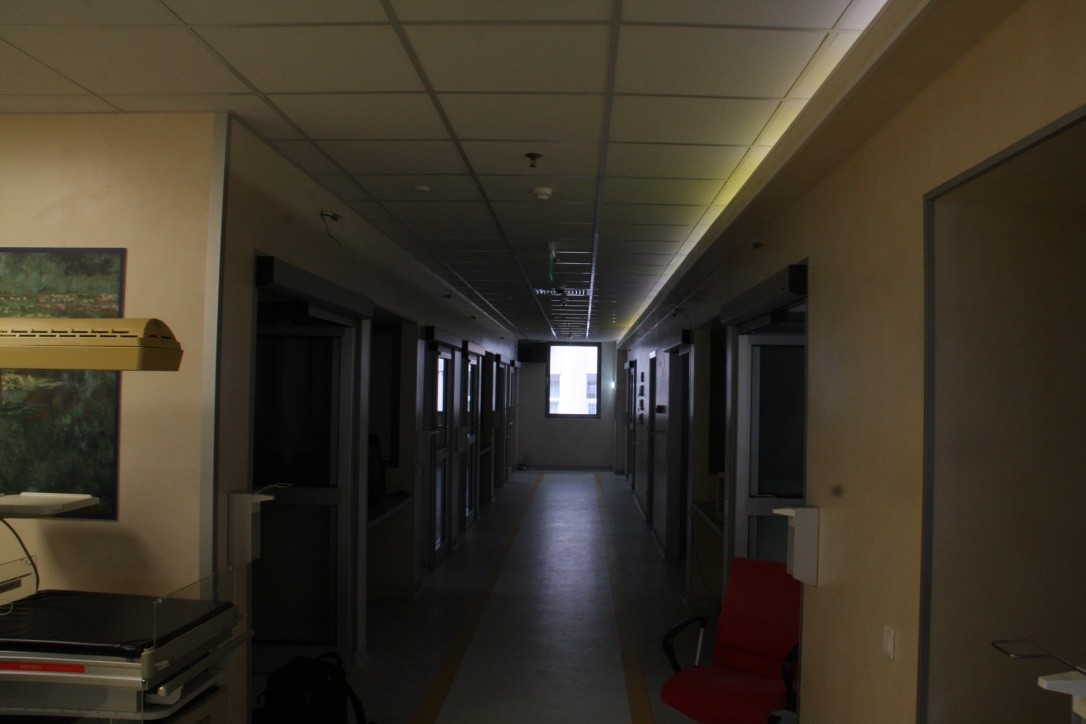 Cove lights for general lighting will use LED strips bright enough to provide the high levels of illumination evenly across the room. As there are can be many situations when dimmer light is needed, we recommend installing a dimming option.

Dimming LED strips require that both the LED strips and the transformer are dimmable. Light intensity can then be controlled via an external dimmer. This can be a rotary or push button wall switch, a remote control, a smart building control signal or an App on the phone or tablet.

Transformers have a specific compatibility with a type of dimmer and require a certain way to lay & connect the electrical wires. It is highly recommended that the type of dimming control is purchased at the same time as the transformer and the LED strip. Also dimming is best considered in the design stage, so the electrical installation is made accordingly.

Currently, a great choice is wireless dimming control via Casambi or Philips Hue compatible products. Both these ecosystems have very mature apps for control, very good privacy controls and many online resources, such as how-to guides.

At Ledrise you will find many flexible LED strips to build the best cove lights possible.

With our full spectrum LED strips with CRI97+ with SunLike Tri-R technology from Toshiba and Seoul Semiconductor, you will have the most natural lighting possible

Full spectrum light can also come from our LinearZ modules that are easy to install and future-proof by using the Zhaga standard for easy future upgrades.

While our Nichia LumiFlex LED strip create lines of light with the highest energy efficacy and lifetime up to 200.000 hours. Minimum CRI for the LumiFlex is 80 with 90+ versions available also.

You can also choose from our Plug & Play range of modules.

The Multibar LED module is easy to install in your home or office, is very bright and comes with a CRI value of 95.

What LED Color Temperature to choose for a project, from 2700K to 6500K