As a manufacturer, we want to use the most powerful LEDs in our LED strips and modules. We focus especially on mid-power LEDs that typically consume less than 0.3 watts of power, are fairly small, and require minimal or no cooling. A large part of our products use these LEDs.

For a meaningful comparison, we have selected LEDs that operate at 65 mA with a voltage between 2.75 and 3.2 V, divided into three groups:

We have also added the performance data of average 5050 and 3528 LED packages, as such LEDs are still used today by many lighting manufacturers, including linear LED modules, fluorescent tubes, lamps, panels or even luxury lights. 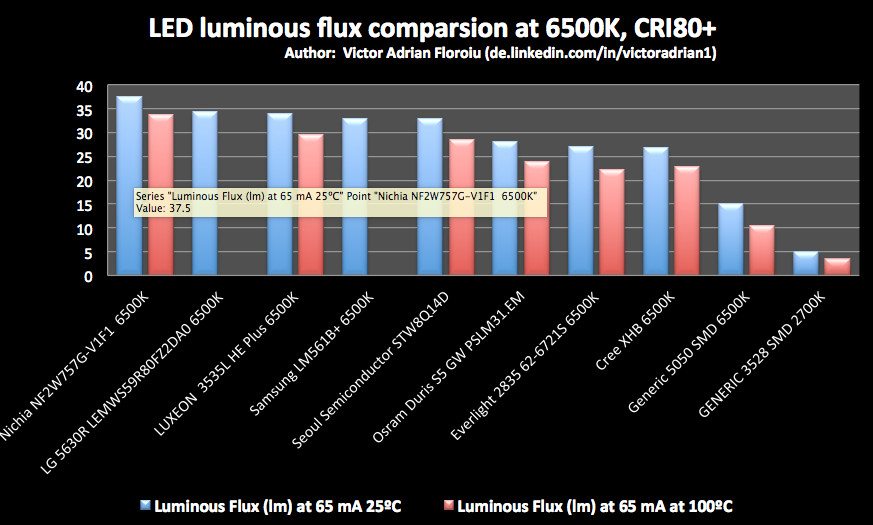 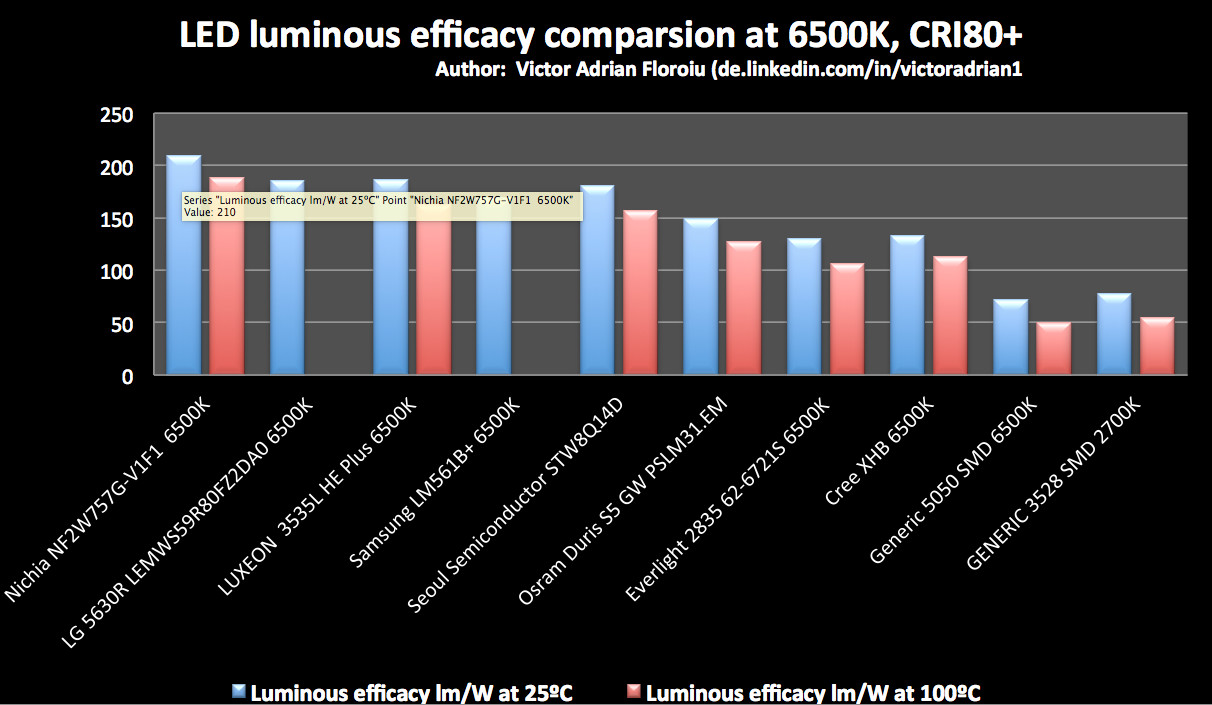 Nichia 757G LEDs have the highest power and efficiency at 25ºC and 100ºC, with 37.5 lumens and 210 lumens / watt and 33.75 lm and 189 lumens / watt. They also have the smallest performance difference between the operating temperatures "laboratory" and "reality" with only 10%.

Samsung and LG LEDs have the same good performance at 25ºC, but cannot be included in the peak, as the data for the ratio between temperature and luminous flux are not available above 85ºC. If this temperature is a mechanical limit, it can be problematic to use the LEDs at the specified current of 65 mA.

Some distance behind Osram are Everlight and Cree.

Most noticeable is the difference between all the latest generation LEDs and the 5050 and 3528. The difference in performance is so great that we can wonder why anyone would still use these LEDs for lighting applications. A luminaire with these LEDs will have such a low output that integration into a project makes little or no sense. It may have been okay a decade ago, but today it seems to be just a waste of resources. 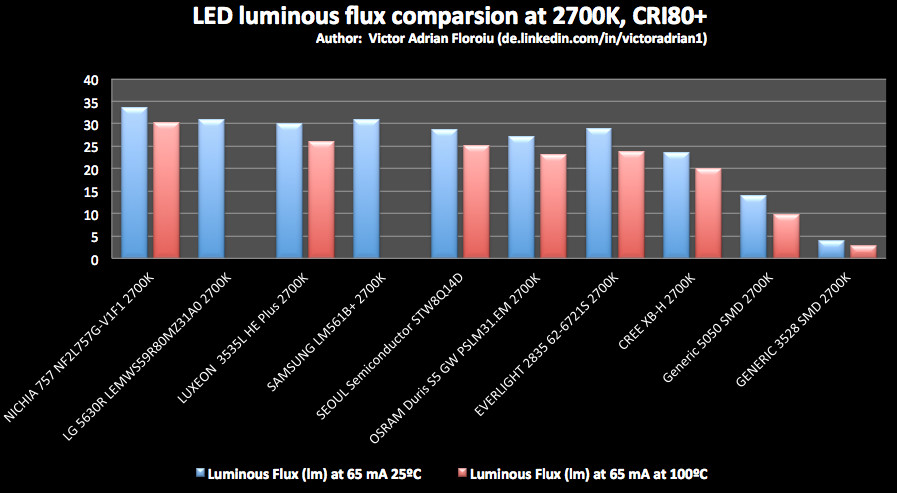 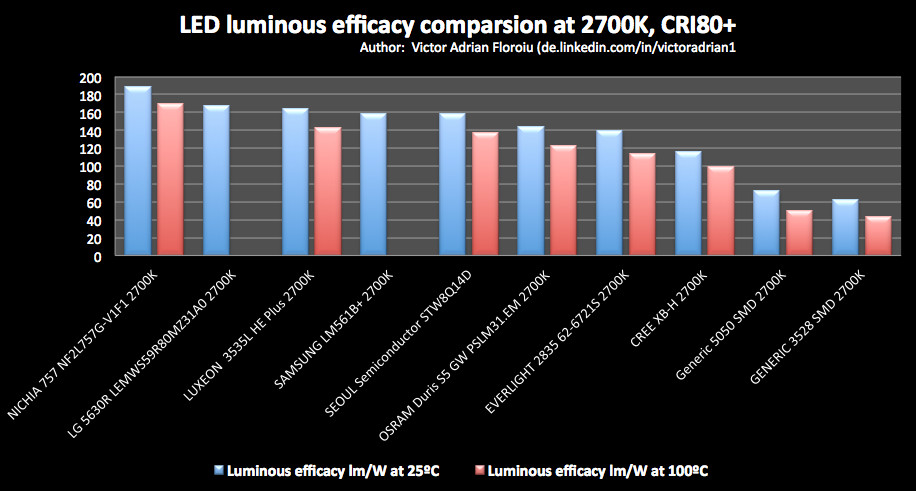 Besides the expected lower luminous flux for all warm white LEDs compared to cold white the situation is the same as 6500K. The Nichia 757G LED has the highest performance, followed by Lumileds and Seoul Semiconductor, with Osram, Everlight and Cree at some distance behind. LG and Samsung could not be included at the 100ºC comparison. 5050 and 3528 LEDs are as inferior at 2700K as they are at 6500K. 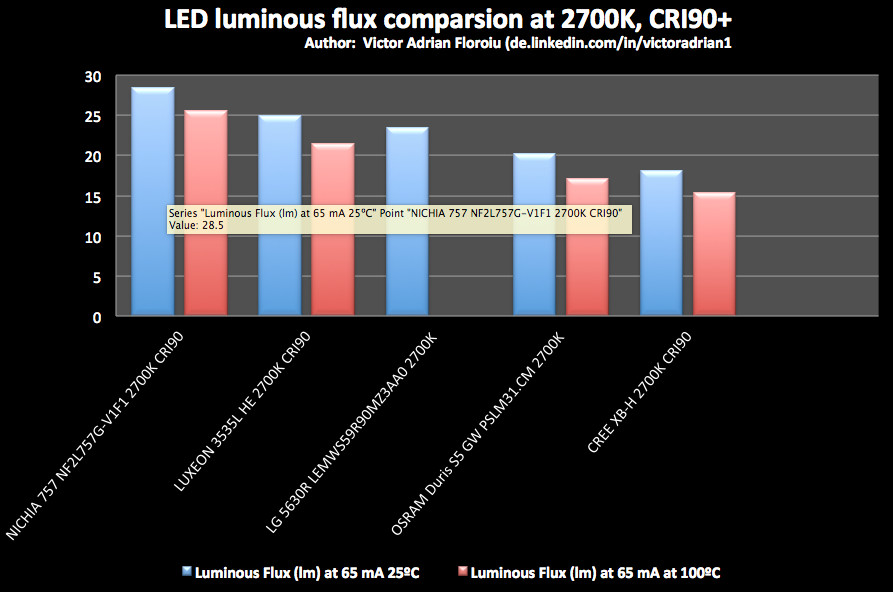 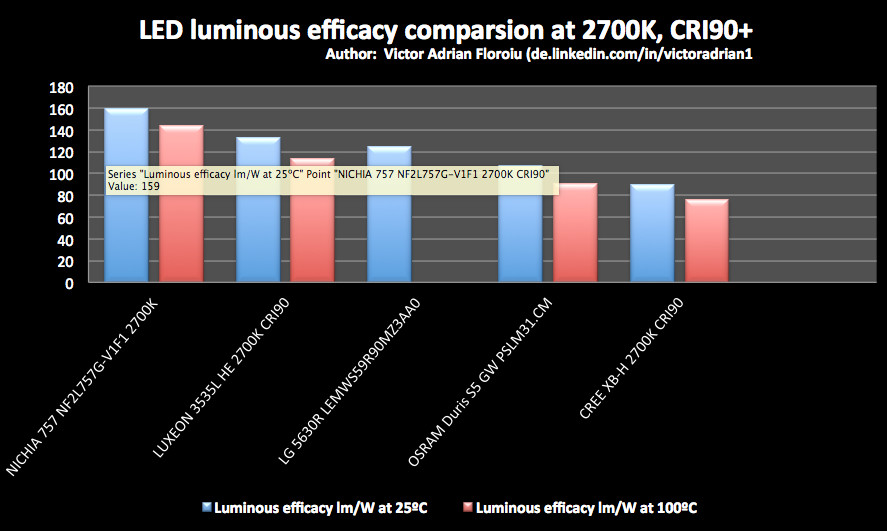 To obtain high light quality is technologically challenging and it also impacts LEDs performance. Not all the manufacturers seem to be able to offer CRI 90+ versions of the middle power LEDs we compared. The performance picture is also different from CRI 80+. The performance difference between Nichia and Lumileds is slightly bigger, 19% at 100ºC, and almost 35% from the third in line, Osram.

As you can see Nichia 757G is the performance leader across the board and that is the reason we use these LEDs in our Lumiflex Strips, Multibar modules and more.