Cultivating crops under artificial lighting in closed and fully controlled environments is a method with growing benefits and global impact.

Industrial indoor agriculture could become the main factor keeping famine and related conflicts at bay. With rising populations, declining agricultural land, pollution, global warming and migration, it will become even more important in the future to grow crops in a reliable, predictable and efficient manner.

A key factor in the success of indoor plant growth is the efficiency of the lighting system in inducing plant growth when compared to sunlight.

To build a very efficient lighting system, some basic scientific concepts should be known

Plants grow through a process called photosynthesis, which converts electromagnetic radiation - light - into chemical energy needed for growth and development. The other ingredients needed are carbon dioxide (CO2), nutrients and water. The process itself is not particularly efficient, converting only 4 to 6 percent of absorbed radiation into chemical energy, but this is the engine that powers most life on the planet.

We should note that electromagnetic radiation, which to a typical human eye is called visible light or simply light, has a spectral range of about 380 to 740 nanometers.

The theory behind PPF is that each absorbed photon, regardless of its wavelength and energy, makes an equal contribution to the photosynthetic process. In accordance with the Stark-Einstein law, each absorbed photon (or quantum) excites an electron, regardless of the photon's energy, between 400 nm and 700 nm. For this reason, photosynthetic photon flux is also referred to as quantum flux.

However, only a portion of photons are absorbed by a plant leaf, which is determined by its optical properties and the concentration of plant pigments, such as chlorophyll A and B and carotenoids (a/-carotene, lycopene, xanthophyll)

Chlorophylls A and B give plant leaves their characteristic green color because they reflect most of the radiation between 500 and 600 nanometers.  Plants that have more carotenoids than chlorophylls reflect wavelengths beyond 540 nm and have yellow, orange, and red colors. This includes autumn leaves when the chlorophylls have dried up. 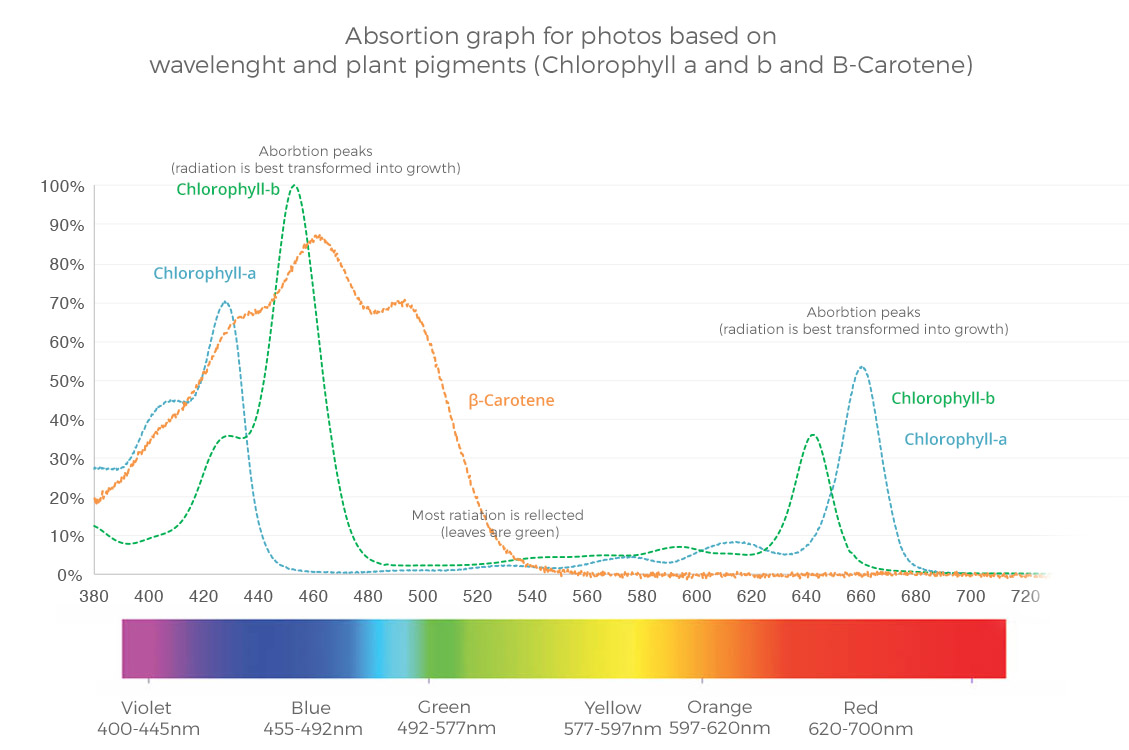 The graph above shows the Typical absorptance spectra for Chlorophyll A, Chlorophyll B and Chlorophyll (beta-carotene). Each are explained briefly below:

Chlorophyll-a is the primary pigment for photosynthesis in plants and it exhibits a grass-green visual color. Can be found in all photosynthetic organisms except photosynthetic bacteria.

Cholorphyll-B exhibits a blue-green visual color and it occurs in all plants, green algae and some prokaryotes. There is usually about half as much Cholorphyll-B as Cholorphyll-A in plants.

Absorption is strong between 420nm and 485nm

By knowing the absorption peaks of the Chlorophyll and Carotene pigments for photosynthesis, the photosynthetically active radiation PAR (PPF and PPFD) of a light source can be calculated.

Luminous flux, in lumens, can be converted into PPF (photosynthetic photon flux or quantum flux) with a mathematical formula based on the spectral power distribution (SPD) of the light source. The result will be a value in μmol/sec that is only relevant to the SPD used in the calculation.

As this conversion requires detailed data of the light source in tabular format (excel table) for the SPD at every interval of 5 nanometers, it is most often manufacturers write PPF values directly in the datasheet. Below are some examples of Lumen to PPF conversion: 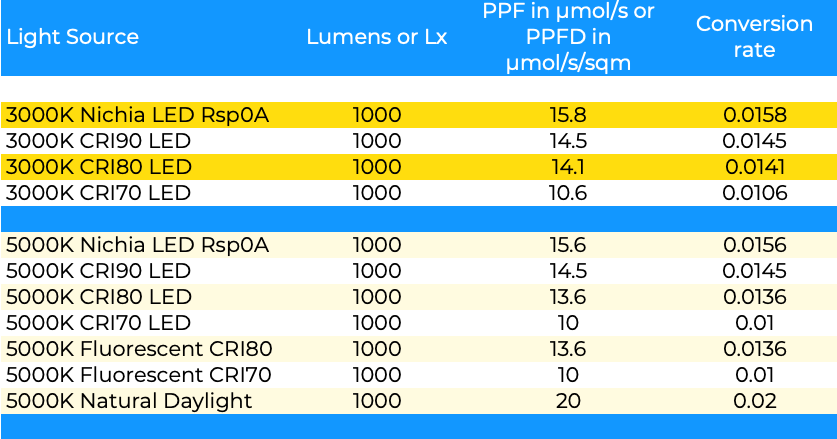 If the PPF value is not mentioned the above numbers can be used for a conversion for other light sources, but with approximate results only.

Iluminance, in lux, can be converted into photosynthetic photon flux density (PPFD) in a similar way with one important difference. This is a value is influenced by the distance and optical properties of the light source (view angle) and is more often measured on the site of installation and not found in the manufacturer datasheet. This approach is difficult to take when the lighting installation is in the planing stange as it requires the LED fixtures to be already in place. The below conversiont tables can help with desiging of the horticulture installation.

The table below shows a PPF to PPFD (100 PPF to PPFD) conversion for a LED lightsource (LED strip) with 120 degree viewing angle. It is important to note that the PPFD per square meter is valid for one square meter of growth area only. If the are is larger areas, LED modules, placed at each square meter, will also iluminate the adiacent squares.

For 100% lighting of one square meter, we recommend a distance of 30 cm between the plant leafs and the LED strip/module.

Usually recommeded light levels for plants are expressed in PPFD. For this reason, PPFD conversion to PPF can be more useful.

Once we know the PPF and PPFD values for a light source we can proceed to design the proper light system for growing plants indoor.

The next step to design the horticulture light system is to research the light intensity suitable for photosynthesis for the specific plants we plan to grow. 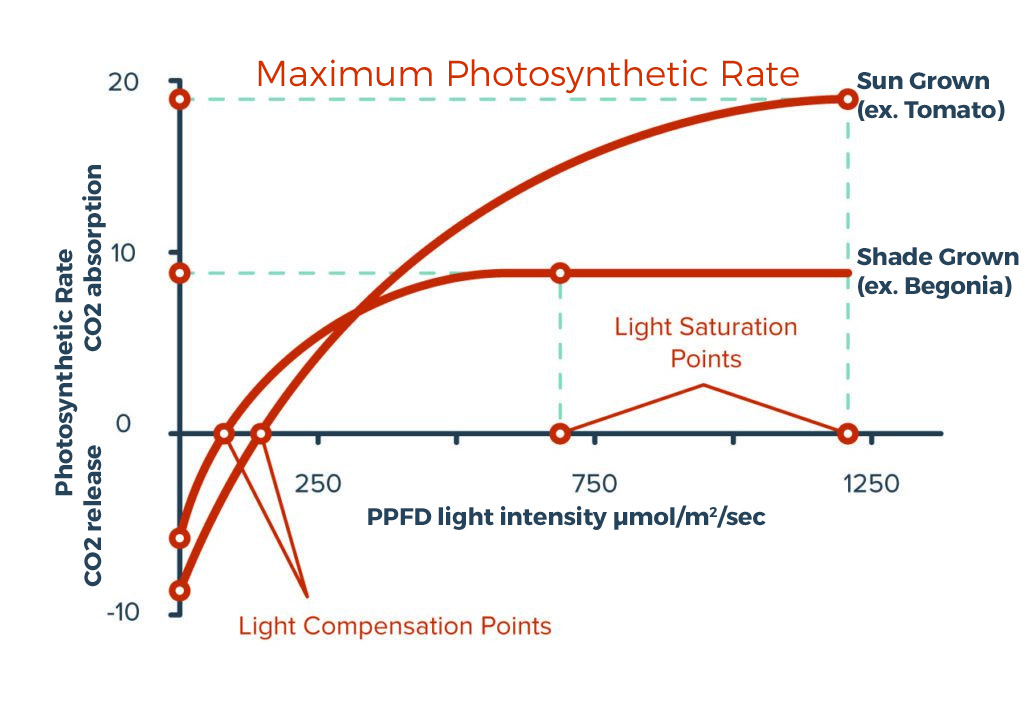 A suitable light intensity for a horticulture installation should be chosen between the compensation and saturation points of plants that are grown.

Below there are examples of compensation, saturation and recommended values for vegetables and crops (Letuce, Tomatoes, Cannabis, Red peper, Cucumber...) 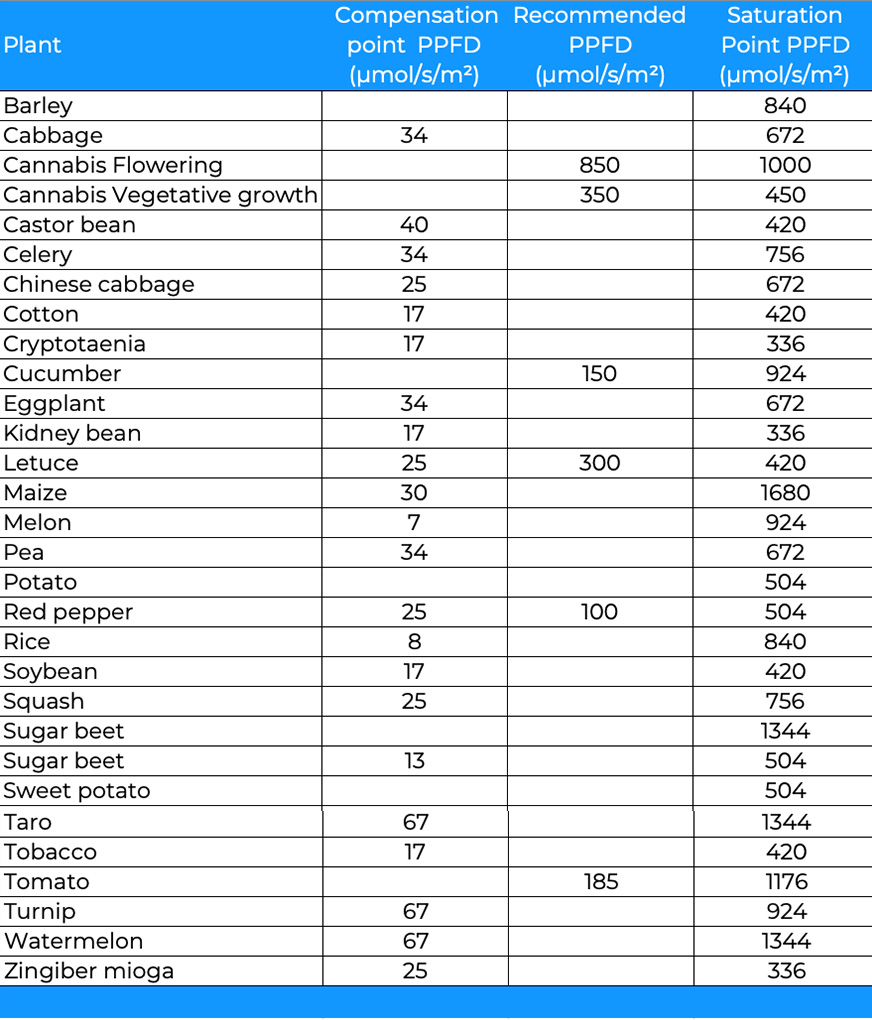 Below are examples of compensation, saturation and recommended values for decorative plants. 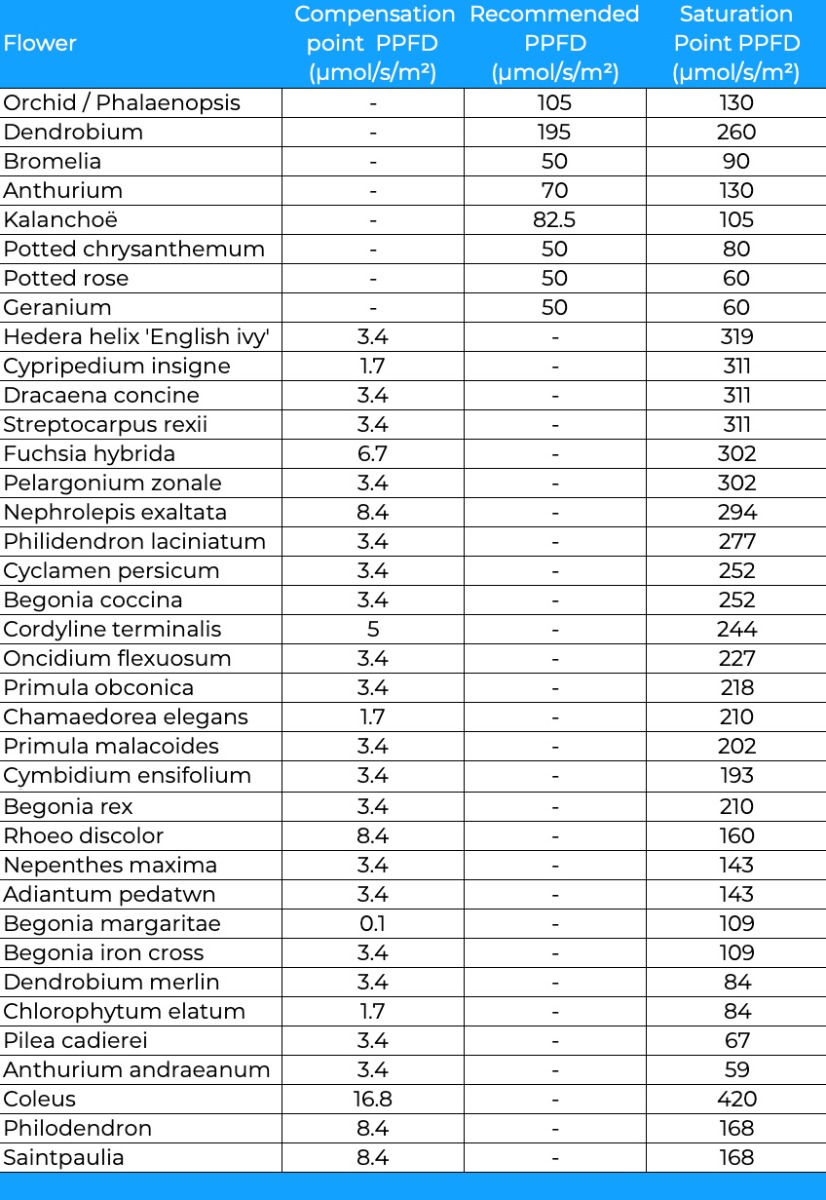 For example, a typical light intensity for cultivation facilities utilized for salad and lettuce would be of about 300 to 400 µmol/m2/sec. In locations where a higher light intensity is needed, such are hybrid type factories, a supplemental lighting of 100 to 150 µmol/m2/sec is recommended.

Currently LED lighting provides the most efficient and cost effective way to illuminate cultivation facilities. However not all LED lighting systems are created equal.

Below are the very important attributes that make the difference.

The LED system should have a very good PPF per power consumption ratio (PPF). For example, our Linearz Nichia Horticulture Rsp0a LED strip at 5000K has 1.82 PPF/Watt, one of the highest on the market.

The LED system should have a minimum color shift over its lifetime of operation otherwise its effectives at growing plants will be severely affected.

As a general rule, long lifetime LEDs, such as those manufactured by Nichia, Osram or Cree has excellent color stability

White LEDs, as with all manufactured products, have material and process variations that yield products with corresponding variation in the shade of white light emitted.  For example Nichia warm white LEDs just out of the production line can have a color temperature between 2580K and 4260K.  If they would be directly integrated into strips or luminaries for plat growth the results will be inconsistent.

To prevent the issue above LEDs must be sorted and grouped in batches known as "Chromaticity Bins". Thus it is possible to have all the LEDs in strip or luminaire have the same color temperature from the visible point of view. For this to happen a 3-step MacAdam Ellipse sorting is needed.

4. Easy installation or replacement of modules

Horticulture makes intensive use of the lighting system, with typical 12-16 hours daily run time. For this reason the modules or strips should be easily replaceable.

The Zhaga shape and connection standard is recommended, at it means that a luminaire can be maintained or updated with LED strips easily. Our LinearZ 52 LED module complies with Zhaga Book 7 L56W2 and LinearZ 26 with Book 7 L28W2.

Plants under the lighting of our LinearZ modules with 757 Rsp0a White LEDs for horticulture will grow up to 50% more than conventional light, including standard white LEDs, a combination of red and blue LEDs or a fluorescent tube. In addition, the energy consumption is lower. You can can purchase them directly from below:

NEXT →
Disinfection with UV Light, >99% Kill Rate for Viruses (incl COVID-19) or Bacteria